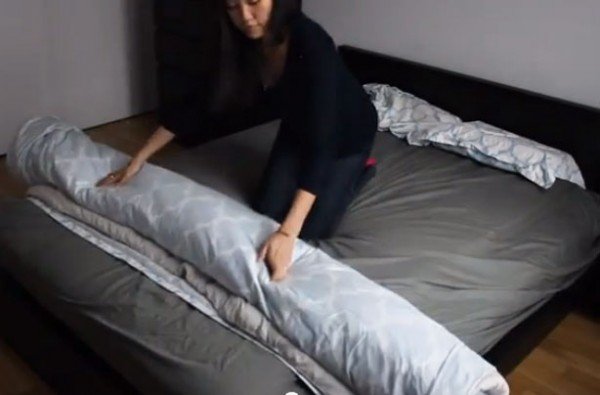 Caring for a duvet cover is easy, putting a duvet cover on after wash is not so simple. We have all been there: fussing with our duvet cover and comforter to make sure it is put on just right. In fact, in a recent Crane & Canopy survey, almost 80% of people find it frustrating to put their comforter in their duvet cover. Especially you want to put on the thick king sized duvet all by yourself! Inhabitat editor Yuka Yoneda shows you a cool trick that will make changing a duvet cover much easier. This ingenious duvet cover trick will change your life, I can tell, are you ready?

Check out the video here.

Turn Flashlight into Black Light with Your Smartphone – Video

Genius (and CHEAP) Ways to Childproof Your Home

How to Make A Candle Flower Pot Heater

How to DIY Tardis Murphy Bed

How To Use Stain To Make Amazing Furniture Art

Awesome Inventions You’ll Want Them All