The brassiere, more commonly known as the bra, has existed in one form or another for a very, very long time. The term “brassiere” was first used in English in 1893 to describe what essentially resembled a camisole, stiffened for support using bones. In 1914, Mary Phelps Jacob was given the first U.S. patent for a bra.

Today the bra has become an essential item for many women, while many others reject it based on their comfort and/or sociopolitical viewpoint. One thing that nearly all women do agree upon is that if you are wearing a bra, having the straps showing doesn’t look great, especially when going with a backless dress. Yes, we could always pick a different dress, but what if it’s something like a bridesmaid’s dress where we don’t have much say? Plus, we all know that when one designer jumps on a trend, they all do, meaning we’re all going to run into this problem eventually. Let’s take the clothes-power back with some good old-fashioned female ingenuity! Ray Lee

is here to show us this simple DIY trick of eliminating the back portion of a standard bra, without sacrificing support with a few cuts and stitches. 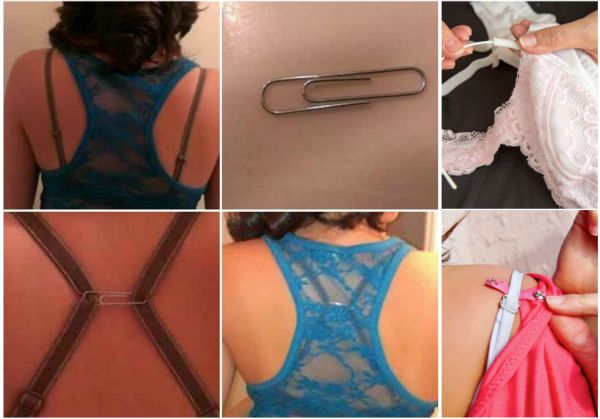 DIY Bra Hacks that Will Make Your Life Easier